The Situation in the Middle East – Security Council, 9207th Meeting 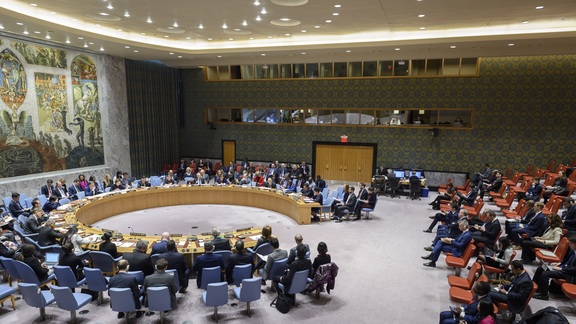 Syria continues to avoid full cooperation with the Organisation for the Prohibition of Chemical Weapons (OPCW) to urgently address information missing from its submitted declarations, including providing details on the unauthorized movement of two cylinders related to the 2018 chemical weapon incident in Douma, the top United Nations official for disarmament told the Security Council today.

Izumi Nakamitsu, High Representative for Disarmament Affairs, briefing the Council on the implementation of resolution 2118 (2013), said efforts by the OPCW Declaration Assessment Team to clarify all outstanding issues on initial and subsequent declarations by Syria have made no progress since the Council last met on the issue. Full cooperation by Syria with the Secretariat is essential to closing all outstanding issues, but due to the identified gaps, inconsistencies and discrepancies, its submitted declaration cannot be considered accurate and complete in accordance with the Convention on the Prohibition of the Development, Production, Stockpiling and Use of Chemical Weapons and of Their Destruction (Chemical Weapons Convention), she said.

Inspections of the Barzah and Jamrayah facilities of the Scientific Studies and Research Centre, scheduled for December, were postponed due to operational reasons, she noted. Further, the Technical Secretariat has not received requested information about the unauthorized movement of two cylinders related to the chemical weapon incident in Douma on 7 April 2018 which were destroyed in an attack on a chemical weapons production facility. She called upon Syria to respond with urgency to all Technical Secretariat requests.

She noted that OPCW, United Nations Office for Project Services (UNOPS) and the Government of Syria have all agreed to a six-month extension of their Tripartite Agreement. Meanwhile, the OPCW Fact-Finding Mission is studying all available information related to allegations of the use of chemical weapons in Syria, having deployed inside the country from 6 to 12 November to interview witnesses. Unfortunately, Syria has not yet completed any of the measures stipulated in paragraph 5 of OPCW Executive Council decision EC-94/DEC.2, she said, adding that the use of chemical weapons anywhere, by anyone, under any circumstances, is intolerable and a serious violation of international law.

In the ensuing debate, delegates sparred over whether to continue regular monthly meetings on the Syria file, with some calling them a waste of Council time and resources. Similarly, while some representatives praised the High Representative’s report, others pushed back against its value, further citing the politicization of the OPCW and the entire Syria file.

The United States’ representative said that obfuscation and delay are still the only words that can describe the way that President Bashar al-Assad and his Government are dealing with the issue. He stressed that OPCW will need to corroborate any further Syrian declarations with on-the-ground follow-up to resume its verification of the destruction of the chemical weapons programme. The Syrian regime continues to enjoy the full support of the Russian Federation as it openly flouts its international obligations, he added.

France’s delegate also cited the frustrating lack of progress, with the Syrian regime stubbornly refusing to cooperate. Independent investigations by the United Nations and the OPCW have revealed eight instances of Syria using weapons of mass destruction against its own population, he said. Recalling that resolution 2118 (2013) was adopted unanimously, and that the reality of the heinous attack on Ghouta in 2013 was never contested, he urged Syria to respond in writing to the questions sent in by the Technical Secretariat.

The Russian Federation’s representative said that the High Representative’s report offers no added value and reflected “a stubborn unwillingness of the OPCW Technical Secretariat to rectify its partisan anti-Syrian line”. Its only purpose is to reflect the political order of the United States and its allies, he said, adding that the Council’s discussions on resolution 2118 (2013) are arguably its least productive meetings, with two hours being spent every month repeating the same points verbatim.

Syria’s representative said that, once again, no developments warranted today’s Council meeting, as certain Western countries insist on flouting its resources and time instead of discussing pressing issues. Calling on OPCW to stop politicizing its technical role, he said that Syria has voluntarily acceded to the Chemical Weapons Convention, destroyed all stockpiles of chemical weapons and their production facilities in record time and agreed to extend the Tripartite Agreement for six months. Describing the Investigation and Identification Team as illegitimate, he said that its mandate was the result of certain States’ flagrant attempts to pursue ulterior motives in Syria.

Oklahoma Students to Hear from NASA Astronaut Aboard Space Station