Structural reforms can be inclusive; it all depends on the details 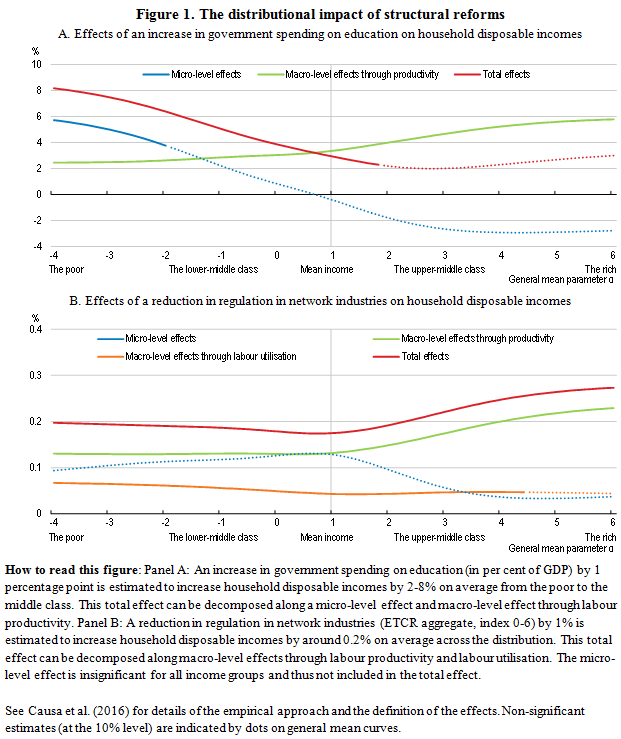 Structural reforms are regularly assessed based on their ability to boost GDP per capita. This emphasis relies on the assumption that higher GDP per capita is systematically associated with rising living standards for the vast majority of citizens. This view is increasingly being challenged. The worrying evolution of income inequality in many countries suggests that distributional considerations need to be more systematically taken into account in policy making. In a nutshell, what are the policy options for making pro-growth policies inclusive?

New research by Causa et al. (2016) sheds some light on this question by adopting a more granular approach to the evaluation of pro-growth policies. First, the analysis delivers the effect of reforms on household incomes at the bottom, the middle and the top of the distribution. This helps to better understand the distributional implications from pro-growth reforms. In particular, it allows for distinguishing reforms that boost incomes across the whole distribution but relatively more among the rich than among the poor from those that boost incomes in the middle class and among the rich but have no effect or depress incomes among the poor. Second, the analysis considers the channels of macroeconomic growth by decomposing the policy effect into growth in employment and growth in labour productivity. This provides a better understanding of the mechanisms through which policies benefit household incomes at different points of the income distribution.

This new research conveys policy relevant messages for the growth and inequality nexus:

Whether pro-growth reforms act via boosting productivity, employment, or both matters: this shapes their distributional implications by compounding their final effects. For example, spurring productivity by easing barriers to firm entry and competition in product markets produces strong macroeconomic gains which accrue to households at large and are fairly equally shared. Yet this reflects two distributionally-offsetting effects: higher labour productivity, which tends to benefit the most affluent households disproportionately, and higher employment, which tends to benefit the less affluent households disproportionately (Chart 1, Panel B).

So, making reforms for inclusive growth is about exploiting synergies, and designing policy packages to mitigate trade-offs. It is thus all about details. At the current juncture there is a crucial need for more growth but also to make it more inclusive. This is not out of reach as countries exhibit large room for packaging structural reforms to target both growth and equity objectives.

Vehicle to Everything (V2X) and Edge Computing: A Secure Lifecycle for UAV-Assisted Vehicle Network and Offloading with Blockchain

Annual meeting of the OECD Schools of Government Network: Skills for a World Class…

On the relationship between ENSO and overland accumulated…

The OECD proposes a prototype for the Blue Dot Network to…